Eat your Heart Out

What makes the work of the American experimental writer Kathy Acker so utterly relevant today, almost thirty years after her passing? 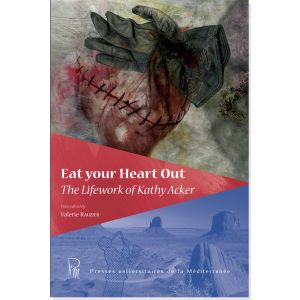 What makes the work of the American experimental writer Kathy Acker so utterly relevant today, almost thirty years after her passing? The articles collected in this volume aim to provide answers to this question. Indeed, through studies of both Acker’s published and unpublished works, analyses of her writing process, and pieces blurring the boundaries between critical and creative writing, these articles map the writer’s body of works and weave webs the way the “Black Tarantula” would. Kathy Acker was part of a tradition of literary radicals and rebels of the 20th century avant-garde that flourished in the Counterculture and continued in the punk culture. Through acts of literary piracy and shock tactics, she unveiled and stood against techniques of domination and control. Indeed, she appropriated others’ texts, subverted genres and genders and thus challenged the rigidity of meaning and identity to allow them to fluctuate and flow. These texts confirm the central roles of both body and language in Acker’s works as spaces of friction between power and liberation and position the writer as a radical practitioner, a visionary.