Questioning “Modernism and Unreadability” means exploring Modernism from the perspective of one of its most roblematic effects: unreadability. 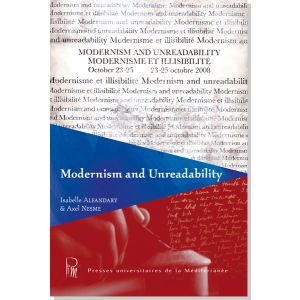 Questioning “Modernism and Unreadability” means exploring Modernism from the perspective of one of its most roblematic effects: unreadability. Modernism is approached through the lens of texts known to be particularly resistant to interpretation—“ borderline” modernist texts which fall de facto under the category of the unreadable, i.e., texts which need to be “unraveled” (Barthes) rather than deciphered. Those texts, now part of the literary canon, raise problems of deciphering/comprehension which defer and displace the question of interpretation. From Stein to Eliot, several canonical texts foil reading, articulation, and commentary. Given its intensity, we need to ask ourselves to what extent modernist unreadability defines a unique historical moment. This latter hypothesis underwrites a polemical notion of literary history as a succession of breaks made manifest by the emergence of radically new paradigms—such as unreadability— through which Modernist writings question literariness from the angle of literalness, and challenge literature—both as a practice and as a historical institution—to account for itself, to justify its procedures and its tacitly or implicitly held beliefs, to deconstruct the very meaning of writing and reading.

Caractéristiques de l'ouvrage
Auteur(s)
Isabelle Alfandary, Axel Nesme
The editors, Isabelle Alfandary and Axel Nesme, are professors of American literature at the universities of Paris-Est and Lyon. They have published extensively on American modernist and post-modernist poetry both in France and in the United States.
Recension