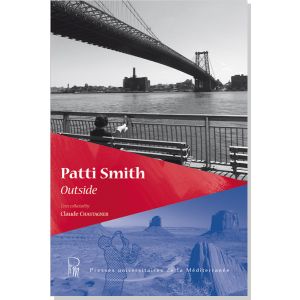 "Outside. Outside of society. That’s where I want to be. If you’re looking, that’s where you’ll find me.” This is what Patti Smith sang back in 1978. Where is she in 2015? With all the fame and recognition. With thirteen original albums released, her poetry regularly reprinted, her paintings and photographs on show in galleries around the world, an induction in the Rock and Roll Hall of Fame, a National Book Award for her first prose work, Just Kids. Is she still outside? Is she still the iconic, rebellious, rock’n’roll figure of her youth? Patti Smith has lived a rock’n’roll life, a life of words and sounds, of poetry and images. She has slept on doorsteps, on park benches. But perhaps she never meant to be outside. Perhaps she did not want to be a rebel. Perhaps being outside is only a price she had to pay.

These are the issues addressed in this collection of essays, not from a historical or sociological angle, but through her artistry. An attempt at locating Patti Smith by assessing her trajectory, her complex, unpredictable moves. “Oh I just move in another dimension,” she sings on “Ain’t It Strange”, before inviting us to come and join her. We have tried and followed her.